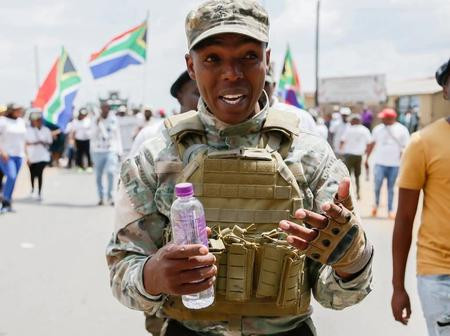 Zandile Dabula, national secretary-general of the movement, said it rejected the “vague” reasons behind the special advisory committee’s decision.

“Operation Dudula has instructed its attorneys to apply for ‘direct access’ to the Constitutional Court on an urgent basis, with an intent to prevent the Minister of Home Affairs [from extending the] ZEP.

“If Zimbabwean permit holders were serious about legalising their stay in SA, [they] would have taken advantage of the opportunity presented by the Department of Home Affairs.”

Home Affairs recently extended ZEP for another six months, from December 31 to June 30, 2023.

“Failure to make representations could mean the current permit holders don’t have valid legal grounds to advance or consciously elected to ignore legalising their stay in SA,” said Dabula.

Dabula said contravention of the Immigration Act was a criminal offence and should not be reasoned otherwise.

“The Minister of Home Affairs Dr Aaron Motsoaledi’s behaviour is consistent with that of Dr Joe Phaahla, who instead of instructing hospitals to report an illegality taking place at public hospitals elects to tell South Africans he is contemplating making lawbreakers pay for medical services,” Dabula said.

ActionSA said it was also concerned about the ZEP decision.

“South Africa has been under the grip of crime, economic squeeze and a seemingly unending plethora of social ills, allegedly due to the influx of migrants and mostly undocumented and illegal immigrants,” the party said.

“It is not long ago that violence flared in Kagiso, west of Johannesburg, when residents took the law into their own hands after the rape of local women by illegal zama-zamas, known to be illegal Basotho hiding in the myriad tunnels in the old West Rand mines.

“The extension of the Zimbabwean special permit to June 2023 is, therefore, a mockery of our constitutional democracy and further chips away at the autonomy of our State and its function, especially on managing our borders.”

However, the organisation that hauled the Department of Home Affairs to court over the permits says the six-month extension was not enough.

Luke Dzviti of the Zimbabwean Immigration Federation (ZIF) said while they were relieved, it was not a solution.

One reason for the extension was that the department had received few applications by Zimbabwean nationals for ordinary visas so far.

Last month, News24 reported that the department made submissions in the Gauteng High Court in Pretoria that only 6 000 of the 178 000 permit holders had made representations on why the department should not terminate their permits.

The ZIF is one of the organisations that took the department to court over the ZEP issue.

It wants the government to be interdicted from arresting or deporting ZEP holders once their permits expire.

In the second part of its application, the ZIF wants the department to review the decision not to extend the ZEP.

The organisation also wants the department to restart the review process for permits and, in the meantime, allow ZEP holders to remain in the country.

Dzviti said they were not backing down on their court action, adding that even with the extension, the department still had “hostile” conditions for renewal.

He argued that in six months, conditions in Zimbabwe would not have changed.

“People have no homes in Zimbabwe. They built their lives here.”

The extension was welcomed by the Federated Hospitality Association of Southern Africa.

The organisation’s Rosemary Anderson said: “Requiring of ZEPs to leave South Africa would not only have negative consequences for the hospitality and tourism industry but would cause trauma and pain to people whose only sin was to legally look for a better life for themselves and their families.”

She added that the unemployment problems in South Africa would not improve even if ZEP holders left the country.

“For tourism and hospitality to deliver on its economic promise, we require an approach where all government departments, business, and labour join forces to remove unnecessary red tape, provide a tourism-friendly environment and elevate our destination status to the level it should be.”