In Conversation with Trevor: ‘Chartered Vendor’ shares his big vision 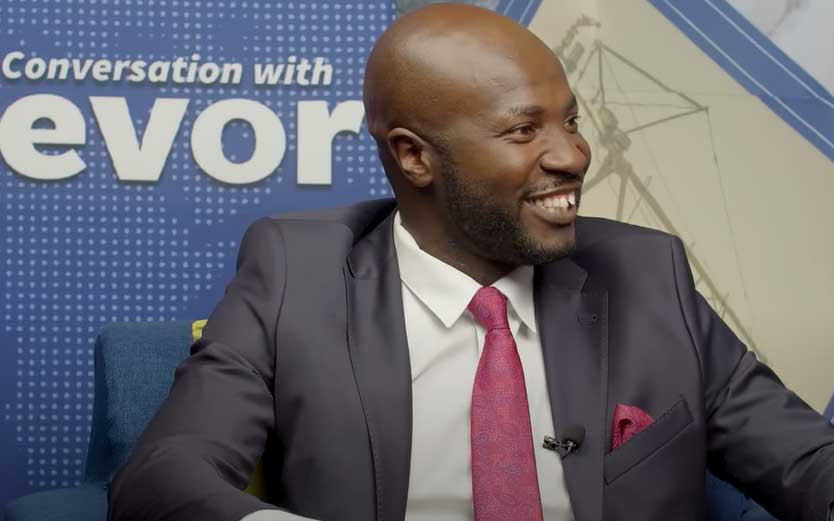 Jerry More Nyazungu, the author of the popular book — The Chartered Vendor — says his vision is to build a multinational company out of Zimbabwe after he started off as a vendor.

Nyazungu (JMN) shared his journey from being a vendor to a successful entrepreneur on the platform In Conversation with Trevor hosted by Alpha Media Holdings chairman Trevor Ncube.

Below are excerpts from the interview.

TN: Jerry More Nyazungu, welcome to In Conversation With Trevor.

TN: I am delighted that you created the time in your busy schedule.

TN: There is a section here Jerry which, if I was editor of this book, I would have edited it out.

Do you want to know which section that is?

TN: You can take a guess?  What do you think that is?

TN: Yes, the maiguru part. Tell viewers what happened there, and locate us, walk us through what happened. Where were you? What were you doing when you encountered maiguru?

JMN: Okay, thank you so much. So, as I was doing vending, selling seeds, selling my bananas, I had now bought a payphone, those pay phones in 2008 when we used to take those office phones and those big Motorolas to use as payphones.

So, she would come to my store, she would uh actually call her relatives several times.

Then I did not even suspect anything.

So, we started our usual relationship, she would come in,  phone and leave, and I was even...

TN: Usual relationship? She was a client?

JMN: She was a client exactly.

TN: She is a customer.

TN: She comes to your vending store?

Every day I would be expectant and I would actually budget the money if she was available because I knew that she would buy a lot of stuff.

Her husband also, we were actually friends with the husband and so he became a friend.

I became more like family, so I did not suspect anything until when I said I think I can teach you...

I started it as a conversation, she wanted to be taught maths and I said at school I was also teaching maths so I could just teach her for free because I know my sums.

Then she said she had  friends as well, then I said I think you guys can pay me a little bit, because she had about three friends who also wanted to be taught.

The first days it was normal, I would go there teach her, then one day I was supposed to teach her at 13.00hrs then she’s changed the schedule and she said I think you can come earlier.

I then called the other friends and I said we have got a lesson earlier today because I thought maybe they had all rescheduled.

When I went there, I got my shocker. I actually opened the door, then she said you can come in Babamunini.

Then I’m like but she’s speaking and she is actually in the bedroom, it was wide open then that’s when I saw oh interesting.

TN: She was naked?

JMN: She was almost half naked.

Then the other friend was behind me, so she saw that. That is when she pushed the door and that is how I escaped the Joseph- Potiphar [woman] moment.

TN: Tell me. So, when I read the story, I was like I would have edited this story out. Why did you include it here? What is the purpose of the story?

JMN: Thank you so much. As I was also writing the Chartered Vendor, I said let me write inn the same manner and that is why I was using names of people, original names of the people.

I also wanted to advise my fellow brothers who are in business, because most of them have actually failed because of these office romance relationships.

Outside the business, sometimes we employ someone, employ your PA, you end up dating your PA and it compromises professionalism.

So, I said, if I put this story, and I also make other men who are out there see how I escaped this situation. There are people also being tempted  on daily basis because we are living in a world which has changed and which is too fast.

So, I said for a young person who wants to get into entrepreneurship [this is an eye-opener], and just imagine, I was a vendor, an ordinary vendor.

Imagine  when one is a CEO in charge of 100 people, maybe you are employing 50 women with different agendas.

So, I just felt like I should tell someone who is especially in Africa because people are going through this almost on daily basis.

JMN: Thank you so much. I think almost 95% of the readers feel that’s the most exciting part of the book.

Even when I had not published the book, I shared this story on my Facebook page and that was my first time to get about 1,000 likes.

So, it seems people they like those kinds of stories, they like romantic stories so I just said...

My wife, actually she is supportive, I did not even consult her when I was writing.

I just said babe you can see the book when it is finally out.

She read the whole book and she also enjoyed that part as well.

TN: Wow. So, well done. I think it put a lot of us to shame. Somebody said there is a book in all of us.

TN: If only we could be disciplined and patient to write the book. You have been disciplined.

Talk to me about what it required of you to write this book, which is 187 pages, which is basically sharing the story of where you have come from and where you are right now?

What did it require from you in terms of any sacrifices?

JMN: Thank you so much for that. I think what happened was during Covid-19, during those first 21 days which were very difficult for us, I was reading a lot of books.

It was just when I was coming from Zambia, I think I had come from Zambia just the previous week.

I started reading books, then I read this other book which was saying everyone has got a story to tell.

As I was reading it, I said no I have that dark moment in my life, [why not] use it as a story which can actually inspire other people?

Then I just thought I was a vendor. It started off; I think I just wrote a small story about my life, and I had this picture when I was wearing my first suit, that was my first professional suit.

Then I posted it on social media, many people were inspired, some people said you are lying, it’s not you.

Then I said to myself,  why can I not just start writing a book?

That is when I said to myself, as the economy is almost closed what can I do, let me start writing the book with the support of my team. I have a wonderful team at  M&J Media and they started pushing me.

I think in almost one month and three weeks I was actually done, but I was waking up every day at 2am, and I would write  to 6am.

After 6am I would start work.

Working from home was good for me because that’s when my company grew. It fared better in the Covid than at any other time.

TN: It is interesting. How do you explain that? That growth of your company during Covid? When there’s a lockdown?

JMN: It was because everyone retreated.

JMN: But because I was reading, I think there is someone who actually said when you want to hide something, especially from a black man, put it in writing.

When I was writing now it opened my eyes. I said to myself I am not supposed to stop, I am supposed to be advertising even more.

There is this guy whose book is called If You are Not First You Are Last.

It was written by a billionaire called the Grant Cardone, an American billionaire.

Circumstances were more or less the same as in Covid when he wrote the book.

He was talking about a flu pandemic, but he was saying that was the right time to put more effort.

We should be advertising even more, we should be posting seven times.

So when I started posting, for sure things started changing, and the I also advised everyone in my organisation that the government said there was a lockdown, butthey did not say it was a holiday!

That was my motto, every day  I would have a meeting at 07.30hrs, we would have a review at 12.30hrs on a daily basis including Sundays while we were in lockdown.

TN: Tell us Jerry, what is it that you do?

JMN: We do business consultancy. Like the Chartered Vendor, what it simply means is I’m a qualified chartered secretary.

I did CIS, and I also got experience from vending. I first started off by registering companies. I would go to Deeds Office to register companies. That is when I started noticing...

TN: I was a client of yours, people need to know that. You registered one of my companies.

JMN: When I was registering companies that is when I noticed a big gap, because I was reading a lot of information from America, from China, then I noticed there was something lacking.

That is when I said I no longer want to do this.

Firstly, it was more like an accounting firm, but right now we are into business consultancy, covering things like marketing.

I have done trainings in Bulawayo, in a lot of cities in Zimbabwe.

We also do human resources (training). I have said how can I build a timeless business in Zimbabwe?

How can we have that small business, that start-up?

How can we make it grow into  a multinational company?

So that is my vision, to say at least if I have three companies which are going to be listed on any stock exchange I would be very delighted.

So that is what we are doing in my company, we are business consultants, but we have got five subsidiaries all which are in consultancy HR...

TN: Talk to us about the five subsidiaries? Which are these?

JMN: There is M&J Consultants, that is an accounting firm.

JMN: We have got M&J Media, it is a marketing and branding firm.

Then we have the Chartered Vendor, is now also a company. We do sales trainings, we also do strategies for organisations.

Then I have got M&J HR, we do human resources and recruitment trainings.

Then lastly, I have got a company called SEPA, it does ERP software.

We do ERP softwares which is called Odo & Hanza.

TN: How many people are you employing now?

JMN: We are employing 65 people in Zimbabwe and in Zambia.