In Conversation with Trevor: Bango: ‘Street wisdom’ shaped me 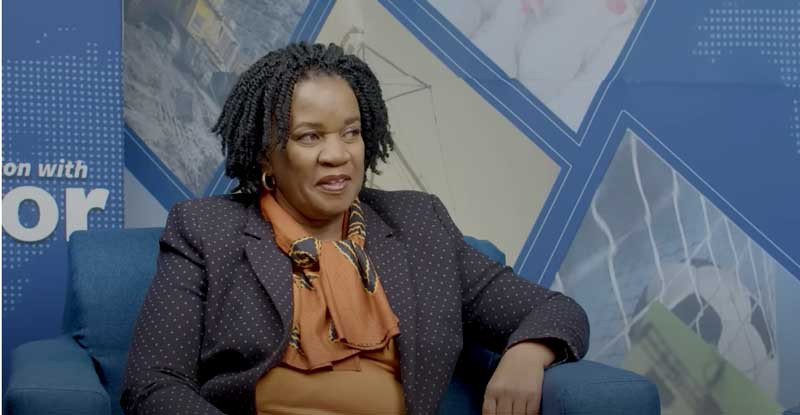 mpretec Zimbabwe executive director Sibusisiwe Bango says being raised by parents, who were businesspeople in one of Bulawayo’s oldest suburbs, taught her how to handle money and investments at an early age.

Bango (SB), told Alpha Media Holdings chairman Trevor Ncube (TN) on the platform In Conversation with Trevor that growing up in Makokoba gave her valuable lessons.

She spoke at length about her upbringing and how her parents influenced her.

Below are excerpts from the interview.

TN: Sibusisiwe Precious Bango, welcome to In Conversation With Trevor.

TN: I always say to people, I don’t take your being here for granted, because I shouldn’t.

You are a very busy person and it has taken us a long time to finally get you to be here Busi, I am so grateful.

As I was reading your bio that you sent to me I laughed when I got to this tug of war, where your father called you Precious, your mother called you Sibusisiwe.

You are the fifth in a family of four boys and four girls.

Talk to me about why your father decided that you would be called Precious and mommy decided for you to be called Sibusisiwe.

SB: I think from what they then told me, my dad always looked at me as the gem, and I think as we talk you will see where this whole thinking comes from.

My mom was a typical Christian-based woman, but a businesswoman as well, very grounded, and as you would understand for those that understand the language (Ndebele), Sibusisiwe means “we are blessed” or “takomborerwa” in Shona.

So I guess for my mother it came from there.

Even though I was the fifth child I would like to believe that they saw a blessing in me.

Precious for my dad, I guess there was also the idea that I am the man, education and all that I am going to give my daughter the name Precious which is English, but obviously which has got also positive meanings to it.

So it came from there.

TN: You were born in Makokoba?

TN: You grew up in Luveve?

Talk to me about this rich upbringing to a businesswoman and a businessman raising you up in those dusty streets as you call them of Makokoba.

All of us that know Makokoba, it is the rough and tumble, it is almost like Mbare Musika at some a point?

I learned a lot growing up in Makokoba, though I left Makokoba when, I think, I was doing Grade 6. In there you would have to wake up in the morning, do whatever you needed to do, go to school, and it was not what we do with our children now, where you drive the kids to school.

We had to walk to school no matter what the weather was like.

Maybe let me add on from there, that from the time I was born I never saw my dad going to work, he was already in business and they ran a fleet of taxis.

There were cars that were there, but I don’t recall a day when I was driven to school in a car.

We all walked, all of us, different schools, my brothers, my sisters, we all had to walk and walk back home.

It was also a time, I recall very vividly, that you would go in the morning, lunch time we would walk back home, eat whatever there was for lunch and walk back to be at school on time by 2 o’clock to start the afternoon activities.

TN: Which school was this?

SB: This was Lotshe Primary School.

SB: Yes. As you say these dusty streets of Makokoba, we grew up like any other kid.

TN: Remind me the water was communal in Makokoba?

SB: Yes the water was communal.

TN: So you went to points where you would fetch water in a bucket and bring it home?

SB: Exactly. You had to do that.

The ablution facilities were communal, so we did all that, though later my parents obviously had to put up their own systems and all that at home, but at the start it was all communal.

TN: So talk to me about being street-wise. You said you got the what? The street-wiseness?

TN: The street wisdom. Talk to me about the street wisdom from Makokoba, which I suppose there is going to be a lot of people watching that have grown up in Mbare and places like Highfield, there is a lot of wisdom that comes from growing in that environment.

SB: I think it is not an easy thing growing up in those suburbs.

You have to be sharp, you have to understand what the other kids are doing.

So, you understand how to avoid the dangers that are in your vicinity through coming across those dangers naturally.

So that is where most of my street wisdom came from, the fights with other kids in the street, I mean when you look at it now, I think that when I look at what I went through I say to myself, but why did I ever do that?

Was it really necessary, you know? But at times you see how you then helped other kids to understand.

However, that roughness that she went through you could see that this is not an easy kind of environment, you just have to sharpen up and I believe with time she also sharpened up.

It is friendships like this that you keep for a long time and with that girl, we are still good friends today.

TN: Wow. Fascinating. Talk to me, your father was in business, taxis, and eventually buses?

TN: What were their names?

SB: My Father was Kay Nicholson and his brother was Benson. So they were in the business of taxis both of them.

TN: They are pioneers?

SB: Pioneers. They were pioneers during the time when we had obviously the colonial government, and I believe some of the wisdom business wise comes from the experiences and seeing them doing what they had to do.

You had situations where your municipal bylaws and your regulations were more inhibitive to black-owned businesses and I think some of the contentions issues around liberation came from there. Look we realised that we are not being treated equally even when you genuinely want to fend for your families and you want to run your business in a clean manner.

I recall stories that my parents would tell me that their taxis were not allowed to park at certain parts of the city, they only were allowed to park in the townships, in the periphery.

Those who know Bulawayo, Lobengula Street, that is where they ended.

You could not get into town. My dad and his twin brother,  were quite naughty if I can put it like that.

TN: Opposite the City Hall?

SB: Opposite the City Hall. Sometimes they would drive their taxis and park in there, because Selbourne Hotel then was the hotel.

They would park in there because they wanted the clientele that came out of the hotel.

They would park the car, come out of the car just stand by the pavement and watch if someone will ask for a taxi.

The competing company then was the Rixi Taxis.

For those that know Rixi Taxis were bigger, I don’t know whether they were white-owned or whatever I am not sure.

The black business people were not allowed to operate there.

TN: What were your father’s taxis called?

TN: What colour were they? Blue?

SB: No they were white. At times they would have the other colours if they bought a new car, but they were mostly white in colour with the Highlanders colours let me say!

TN: Talk to me Busi now about what your father taught you.

SB: I think hard work, they taught me hard work,  then taught me how to handle money. Up to today, I think those lessons are still pertinent.

They taught me at that age about investments, and mind you it was not just me but the whole family we are talking about...

SB: They taught me how to handle money, you know when you have money what do you do?

Of course, when we were growing up you had all the drivers and they would come and cash up, so we looked at that, we understood that if they had made collections during the day, all the money should be counted, put together in the evening so that we know we have got so much.

The drivers would come the following morning, they take the taxis, they go ply their trade.

At times if it was busy they would come lunchtime, you know.

My parents had an office in the township in Makokoba.

So they would go there every day to their office, the drivers would come and surrender the takings, lunchtime go back and ply their trade.

For us as kids we learned how to handle money at a very early age.

I recall every evening when the cars were parked, we would get into the taxis and start searching for coins that have fallen off the pockets of the drivers and every day I can say we had pocket money at school.

TN: From the droppings?

SB: From the droppings you would pick up. If you pick a tiki or a penny...

TN: That was a lot of money!

SB: It was a lot of money then.

The other kids at schools would always want to be friends with Sibu, she’s got money and maybe she’ll buy you a quickie or something like that.

So that is what it was.

They (my parents) taught me about that, they told me about investments.

I recall very vividly when I think I had passed ‘A’ Levels and my dad, I think they managed to actually save quite a chunk of money, and my parents called me and we sat outside.

We were now living in Luveve.

We sat outside and they told me Busi we have got so much money and we wanted to find out what do you think we should do with the money.

“In Conversation With Trevor” is a weekly show broadcast on YouTube.com//InConversationWithTrevor.  The conversations are to you by Heart and Soul Broadcasting Services