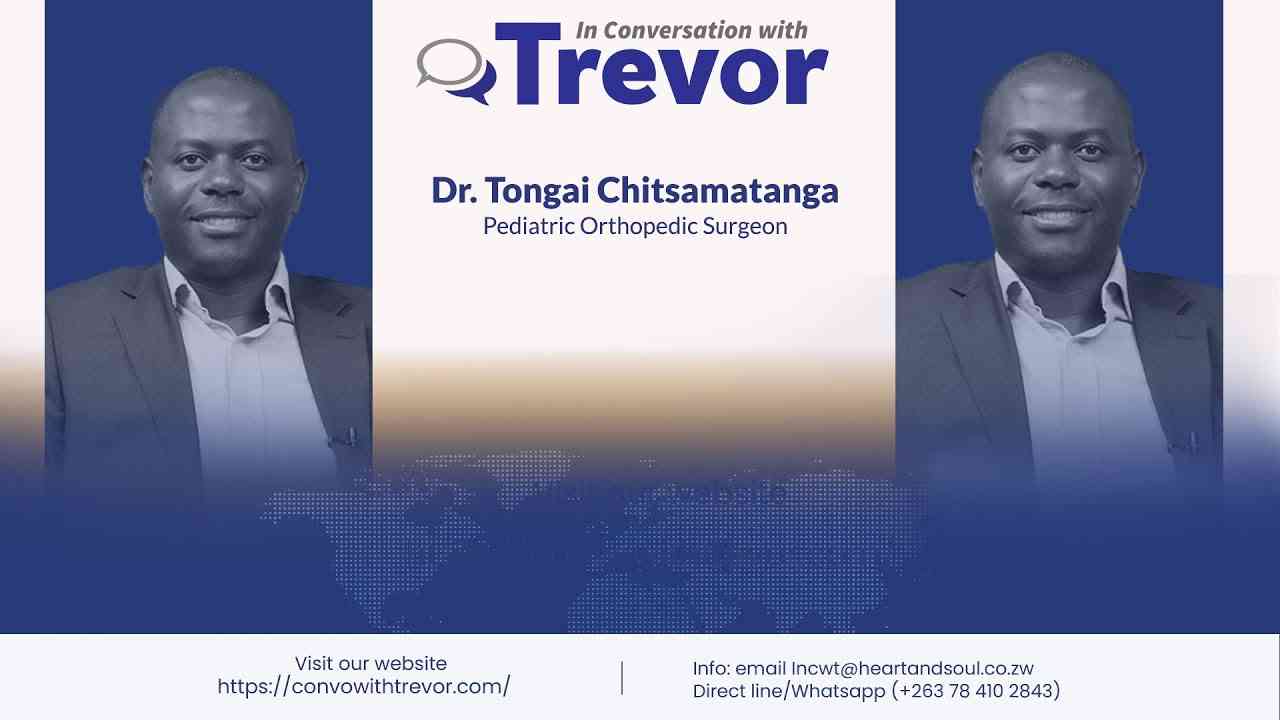 A Bulawayo-based children’s hospital is offering relief for thousands of Zimbabwean children with club foot or similar conditions free of charge.

Tongai Chitsamatsang (TC), a paediatric orthopaedic surgeon at Cure Zimbabwe, was on the platform In Conversation with Trevor hosted by Alpha Media Holdings chairman Trevor Ncube (TN) where he spoke about the services offered by the hospital.

Below are excerpts from the wide ranging interview.

TN: Dr. Tongai Chitsamatanga, welcome to In Conversation With Trevor.

TC: Thank you Trevor for having me.

You love children, and you love helping children.

Talk to us about how you found that passion.

TC: Thank you so much Trevor.

It has been a very long road.

I could even say that the passion started with just the love for medicine, as way back as when I was seven years old.

I remember an uncle of mine asking me: What do you want to be when you grow up?

I think as most children my age at that time they would say I want to be a doctor.

Then we did the internship after medical school at Parirenyatwa Hospital, between 2004 and 2006, and then later on went to a mission hospital.

TN: Wait, let me just stop you there.

I mean at that young age, you already knew what you wanted to do?

Most of us I think, do not even know what we want to do late in life.

Where do you think that inspiration came from?

That I want to be a doctor, particularly given the fact that, we will talk about your background and upbringing, where do you think that passion came from?

TC: I think it was a combination of things. I think one of the motivational people was actually our family doctor.

We used to go there quite often, and I remember getting into his surgery, and then you see sitting on the other side of the table, and then just looking at him and saying so what does it take to be a doctor?

TN: Hahahaha. So he clearly made an impression?

TC: He did make an impression, yes. All the time we went there, I mean you would come out feeling much better yes.

TN: You work for an organisation, which until we met you, you were reminding we met at  the Bulawayo Airport I think sometime last year, I did not know that this organisation existed.

It is called Cure Zimbabwe and Cure International.

Talk to us about what Cure does?

You do such amazing work and yet very few people are aware of the work that you do.

TC: Cure International is an organisation that has hospitals in about eight different countries, mostly in Africa.

The main focus is to assist the disadvantaged child, especially on the orthopedic side, but we also have children that have for example cleft lip, and then in one of the centres they also assist children with spinal issues and also some with brain issues.

So, it is just aimed at assisting the disadvantaged child and in most of the cases that child who society would shun because of their disability.

Then Cure Zimbabwe started last year, so we are a year old, and our main focus at the moment is pediatric orthopaedics.

We also have children that come in with bone infections.

Sometimes you get children that are walking around with bones sticking out and some cases like that.

From next year we will be having a plastic surgeon who will be assisting us with cleft lip, and then also some children with bone contracture.

All this is done for free, so the children do not pay anything in terms of consultation, for the surgeries that need to be done and anything else that is associated with their treatment.

So this has brought a lot of relief to the parents and also the children and the society.

TN: Why the decision to locate in Bulawayo? Help us understand that.

TC: I think it was after looking around, the government then offered the current location, this used to be a TB sanatorium, and then later on became hostels for nurses and doctors, and it then got burnt down sometime in, I think somewhere in the 2000s.

So when the organisation, which  started the hospital called the Zimbabwe Orthopaedic Trust, went around and then did the memorandum of agreement with the government, they were then shown this place and they fell in love with it.

TN: Where exactly is it? Where are you located?

TC: We are located along 12th Avenue Extension behind the United Bulawayo Hospitals.

TC: Club foot is a condition where the feet are turned inwards, and the child for example, when they get to walking age, they are not going to be able to walk on the sole of their feet.

So they end up walking on the sides of the feet and that is quite painful, and later on they might develop problems around that foot.

In most of the cases we do not know what causes it, but a few cases are associated with some conditions such as what is called spinal bifida, which is a problem with the spine.

So most of the cases we do know what causes it, but what we know is that the children that have club foot which has not been treated, they face a lot of stigmatisation in society.

Some of them end up not going to school, some of them just get locked up in the house because maybe the family is embarrassed for them to be seen.

TN: This is the same with cleft lips isn't it?

TN: There is a lot of stigmatisation and the pilots condition too. Are you seeing lots of these people coming to you?

TC: In terms of cleft palate and cleft lip we have not yet started to offer the service, but from next year we are going to be offering it and so definitely I will let the people know when we start that service.

Club foot we are seeing quite a lot.

TC: Quite a lot of club foot.

Some who come in without maybe having been treated, and then we have others that come in after having been treated, but then they recur because there are processes to the treatment that one is to adhere to and it needs a lot of commitment, five to six years of serial castings, putting plasters, trying to correct the deformity and then wearing, initially if the child is young they wear what are called abduction braces.

These are shoes with a bar in between, or they might also wear what is called ankle phototosis, just to maintain the reduction that we would have achieved from the serial casting.

TN: What conditions are you finding you are dealing with the most?

Is it club foot? Is it bends? What is it that you are dealing with most?

TC: It is mostly club foot.

TC: Then I think second to club foot we are seeing patients with the osteogenesis imperfecta, what you could call a brittle bone disease.

So the history normally is that of a child who comes in with multiple fractures as they grow.

So they can even start at delivery if the delivery would have been complicated, as they deliver the child, the child can break and normally that is when maybe the parents notice that this child has a problem.

Then we can see them at different ages.

Then that child, if they are walking then they go back in terms of their milestones or they regress and it affects quite a lot of things.

If they are going to school then they can no longer go to school.

If they are older, the parents cannot carry this child because the child is heavy, in some cases the child would be in pain especially soon after the break.

TN: For parents and viewers watching us out there, what do you say to them in terms of how to deal with these conditions and how to find you?

TC: To the parents, I think what I would say is now we have a place where we can assist the children, and you know it is things that we can take for granted, but when you look at some of the surgeries these children have or ought to have, they can cost as much as US$3 000, and most families cannot afford such surgeries.

So, with this coming into place, of Cure Zimbabwe, it has taken away that element of the cost.

So what just needs to happen is I guess for us to go out there and get people to know that they can be assisted.

They can also go even on the internet, on Facebook we are there.

You can call the numbers, book for the patients or their children and also maybe even go through their general practitioners and make appointments.

Then we get to see them. Normally we have clinics on Monday and Tuesday, and then we schedule operations.

TN: And it is all for free?

TC: No cost to the patient.

TN: Wow. How do you fund it? How are you able to carry this cost?

TC: So the funding is mostly from individual donors. We even have some Zimbabweans in the diaspora, contributing say just £5 a month consistently.

Then we have also some other major donors, individual donors in most cases.

Normally what people do is they fund a surgery and once you fund the surgery it depends on the type of surgery.

We are able to do more sometimes with money that is meant for one surgery.

I think the other thing is, this is a public-private partnership between the government of Zimbabwe and the Zimbabwe Orthopaedic Trust.

TN: So the Zimbabwean government, the taxpayer contributes to it?

TC: They do not contribute per se.

TC: The area where the hospital was built on was free of charge from the government.

So again I think that also takes away a lot of the cost to the patients.