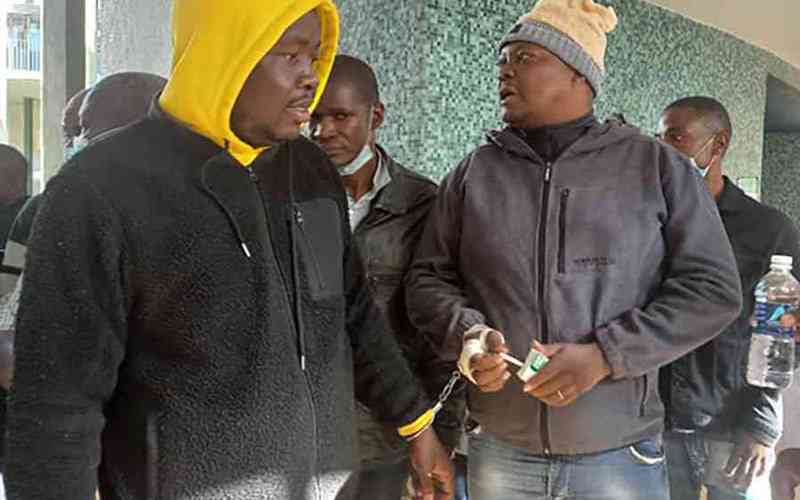 OPPOSITION Citizens Coalition for Change (CCC) MP Godfrey Sithole yesterday narrated his 149-day ‘horror’ prison ordeal, saying he was lucky not to have been infected with various diseases owing to poor living conditions.

Sithole was arrested on June 14 in connection with the violence that took place in Nyatsime at the funeral of slain CCC activist Moreblessing Ali.

He was charged with incitement to public violence alongside fellow MP Job Sikhala and 14 other Nyatsime residents.

Sikhala and Nyatsime residents are still in remand prison despite several attempts to apply for bail.

In an exclusive interview with The Standard, Sithole said he came face to face with ‘horror’ on his first night at Harare central prison where he had to sleep in a pest-infested prison cell.

He said they were classified as political prisoners.

“In our case, we were mostly ill-treated.

“Our visitors were turned away, we were denied access to medical practitioners and even our lawyers were most of the time not allowed to visit us,” an emotional Sithole said.

“The cells are very dirty, lice-infested and smell of urine.”

He suffered cold nights while in detention at Harare Central Prison.

“It was at the peak of the winter season,” Sithole said.

“There were no blankets and there was no food. We spent two nights there before we were then transferred to Chikurubi Maximum Security Prison.”

At Chikurubi, the situation was no different with officials at the prison allegedly being hostile to Sithole and Sikhala.

The duo — used to spending time at work and with their families — had to endure several cold nights detained in solitary confinement.

“I and Sikhala were detained in solitary confinement. We had to sleep at 3 in the afternoon,” Sithole said.

“We had 17 hours of sleep and the conditions are not good, they are very bad.

“If you see that the conditions of the whole country generally are very bad, just imagine what it means for Chikurubi, it’s bound to be worse.

“The food is pathetic, prisoners get food which is not nutritious, the vegetables that we were given had no cooking oil, no salt and other basic ingredients that ensure people have a healthy and balanced diet.”

Every night, the politician also feared for his life due to poor medical facilities and disaster preparedness.

Sithole claimed the prison is overpopulated and at high risk for disease outbreaks.

“At Chikurubi Maximum Security Prison, they do not have enough blankets, it’s a crisis and people are just congested,” he said.

“You can have 40 people in a cell designed for 15 people at Chikurubi; their disaster preparedness programme is in shambles.

“As you are aware, last year a prominent prisoner Martin Gumbura died of Covid-19 at Chikurubi.”

Only last week, according to Sithole, there was a Shigella outbreak at the prison.

Sihigella, according to medical journals, is caused by eating food prepared by someone with a Shigella infection and drinking and eating contaminated water and food.

While it is normally treatable, people with underlying conditions may be at risk. Symptoms include diarrhoea (sometimes bloody), fever, and stomach cramps.

“I believe that those who are in remand prison whom I cannot name are not supposed to be there, I don’t believe they committed any crime,” Sithole said.