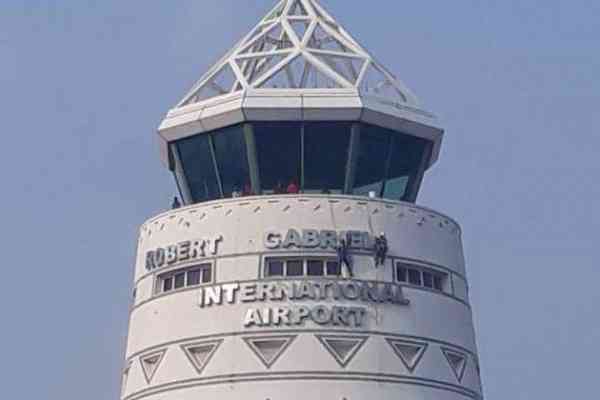 ROBERT Gabriel Mugabe International (RGMI) Airport is the busiest airport in the country and its  architectural handiwork is among the best in Africa, South of the Sahara. It is also the most visited edifice by various students for educational purposes, which have proven to be handy in their particular areas of study.

According to Zimarchitect, a website for Zimbabwe architectural news, most of RGMI airport designs were copied from Great Zimbabwe Monument, another major tourist attraction place for both local and foreign visitors.

Yours Truly has in the previous travelling and touring columns articulated on how some writers have tried to decipher the purpose of some structures found at Great Zimbabwe Monument such as  the Conical Tower, Great Enclosure, passageways among others.

However, this will be covered in detail as local architects 'try' to explain how the structures constructed at RGMI airport came into being.

Explanations proffered by this particular  website were that the airport was built during what is described as a postmodernist era inspired by decorative designs found at Great Zimbabwe Monument.

The authorities had a clear intention of coming up with a unique Zimbabwean-structures when constructing the terminal building. All this was part of efforts to boost the country's travel and touring industry.

Those who are in the know of this prestigious airport might be aware that the windows of terminal station are arranged within horizontal chevron patterns whose inspiration is drawn from patterns inside Great Zimbabwe Monument' Great Enclosure.

The airport's most impressive feature is the control tower whose design 'incorporates' features of Great Zimbabwe's such as  the Conîcal Tower situated inside the Great Enclosure.

According to Zimarchitect, the control tower, as focal point of airport communications and airplane control, is symbolic whose similarity is akin to symbolism of the Conical Tower, which symbolised the importance of the old capital and that served as a focal point of the Shona state.

The air bridges that serve as passageways for passengers' airplane boarding, protrude from the main terminal and, their exterior are appropriately decorated, are reminders of passages leading to the Conical Tower inside the Great Enclosure.

In contrast, the airport' passageways interior design is modern and lacking the traditional Zimbabwean architectural style. The only exception is a snack bar that  is surrounded by four conical towers.

As post-modernist architecture, RGMI airport formerly known as Harare International Airport provides clues to better interpret the meaning of pre-colonial architecture, such as the Conical Tower at Great Zimbabwe.

However, there are others with divergent views on actual 'meaning' of structures situated at the Great Zimbabwe Monument.

Yours Truly was over the moon last week upon receiving a book entitled, Great Zimbabwe: Who Built It and Why?.

The book written by Cosmas Nyamutswa seeks to explain how Great Zimbabwe Monument came into being and interpretations of artefacts found at the site.

Some of the interpretations include, conical towers, enclosures, among other related issues.

However, the interpretations are diametrically opposite with what has been described in the above preceding paragraphs.

According to Nyamutswa's book, the Conical Tower at Great Zimbabwe Ruins represents a circumcised male organ.

"The Conical Tower on the other hand, is clearly a work of art which represents an erect, circumcised phallus (male sexual organ). The top of the conical tower used to display significant phallic features before it was destroyed by Karl Mauch," wrote Nyamutswa.

To the uninitiated, Karl Mauch was a Germany explorer who made geologic and archaeological discoveries in southern Africa, notably goldfields in Hartley Hills and Great Zimbabwe Monument.

Nyamutswa went on to explain that The Great Enclosure was where male and female circumcision took place high walls provided secrecy, privacy and security 'contrary' to some findings by various interested individuals whose theories found their way iconic national edifices.

Information gleaned from this particular book states that The Great Enclosure was constructed to resemble a womb in an attractive proposition.

The book has information on original owners of Great Zimbabwe Monument and also explains on meaning of most artefacts found at the site which all borders on circumcision headquarters during that particular period dating back to more than 300 years ago.

If the conical tower at Robert Mugabe International Airport was emulated from Great Zimbabwe Monument, does it mean that interpretations of the above named structures are also in tandem with what is written in the book, Great Zimbabwe: Who Built It and Why?.

Yours Truly has taken a closer look at the conical tower situated at RGMI airport and have somehow discovered an interesting feature.

However, this could be the last script on this topical conical tower subject as well as this particular world heritage site.

How the accounting profession is key to Zimbabwe’s sustainable economic development
The public sector cannot meet this challenge without substantial support from private investors.
Standard People
By Kevin Dancey and Bruce Vivian
20h ago