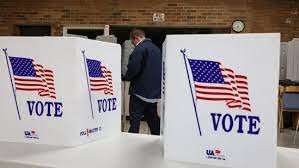 INFLATION, which has pushed up prices of houses, fuel and basic commodities in the United States of America under the watch of President Joe Biden, is one of the major electoral issue being discussed by US citizens as they partake in mid-term elections.

Voters queuing to vote in Raleigh who spoke to NewsDay on voting day Tuesday, accused US President Biden of failing to deal with rising inflation.

They said the move to close fuel pipelines in America, and reliance on imports has pushed gas prices upwards.

“Folks can’t afford rentals and put food on the table. Biden closed the pipelines and pushed prices off the roof, he has made a mess of the economy, and I just want him gone,” an elderly voter who identified herself as Gina said.

A journalist from The Atlantic, David Graham said fear was employed by the Republicans and Democrats to shore up votes in an election which will have a big effect on who will be the next American President.

The Republicans, pushing to close out America to immigrants and foreign nationals, told voters ahead of election day that crime rates have been rising due to porous borders.  They said a wall must be built between the US and Mexico.

Meanwhile, Democrats were telling Republican voters that they are putting democracy at risk, which might result in violence and disrespect of the vote.

“The two sides have been using fear to drive votes; the Republicans are riding on the border security issue, which they say is the reason crime is high.  The level of unemployment is high as well as inflation, while the democrats are talking of the Republicans as a violent lot and a club of election deniers. So fear is at the centre of these elections,” Graham said.

Associate Professor at the Hussman School of journalism, Joseph Czabovsky, said issues around elections in America were different depending on one’s societal class.

“The older, retired and wealthier white folks will tend to vote Republican, because they speak more on issues that resonate with them, while the younger educated tend to appeal to the Democrats,” he said.