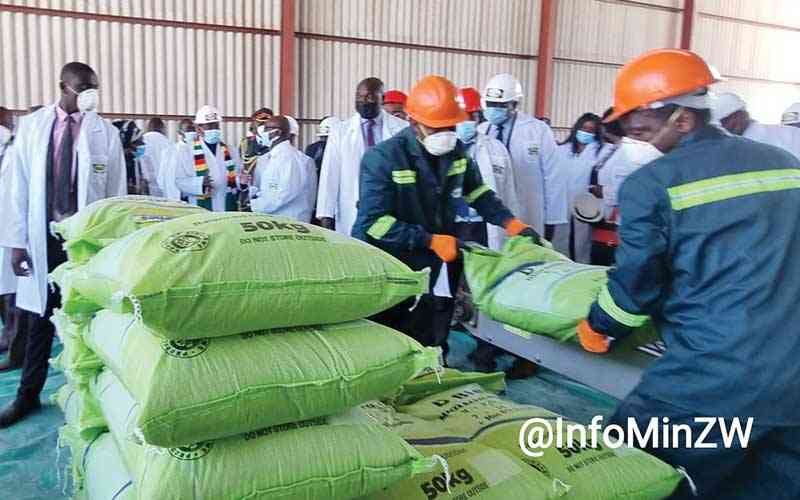 Under the National Development Strategy 1, agriculture has been placed at the heart of economic recovery, and is expected to complement tourism, manufacturing and mining.

The 225 000 tonnes capacity plant that is expected to be commissioned during the first half of 2023 will help Zimbabwe plug a huge supply gap being experienced by farmers.

Zimbabwe currently imports over 80% of its fertiliser requirements, and produces only 18%, official data showed, noting that full-scale production had been hampered by lack of investment at Dorowa Mines, which holds substantial phosphate deposits.

“IDC has future plans to invest in a second superphosphates plant with an annual production capacity of 225 000 tonnes of superphosphate for fertiliser production,” Industry and Commerce minister Sekai Nzenza said on Monday at the commissioning of the US$1,1 million ZimPhos fertiliser blending plant in Msasa, Harare.

“There are also plans to invest in a second granulation plant with an annual production capacity of 300 000 tonnes of basal fertiliser, and these two plants will be commissioned during the first half of 2023 and create additional 300 jobs,” the minister added.

In a report released after a tour of the firm’s facility, Nzenza said the new plant had capacity to produce 200 000 tonnes per annum.

“The new blending fertiliser plant worth US$1,1 million has the capacity to produce 200 000 tonnes per annum,” she said.

“This is the plant being ceremonially commissioned, following installation in April 2022. The plant is already producing fertilisers in preparation for the 2022/23 summer cropping season,” she added.

Nzenza said the company had also invested in a new fertiliser granulation plant worth US$1,1 million, with a capacity to produce 120 000 tonnes of fertilisers annually.

The equipment for the plant was currently being imported and will be installed this month.

Nzenza said the two plants had capacity to supply about 50% of the required national basal fertiliser demand, adding that this would result in foreign currency savings of over US$250 million per annum.

To produce this, production plants required 280 000 tonnes of beneficiated phosphates.

This demand is projected to grow to one million tonnes as the agricultural sector expands.

“The fertiliser value chain is one of the key priorities in the National Development Strategy 1 (2021-2025), where the thrust is to support local fertiliser production to complement the National Enhanced Agriculture Productivity Scheme, save foreign currency and generate employment,” Nzenza said.

“This will be achieved through enhancing linkages from phosphates mining, fertiliser manufacturing and uptake in the agriculture sector. The envisaged increase in local supply of basal fertilisers through the ongoing capital projects will improve the fertiliser application rate by farmers, thereby improving yields and enhance food security. The fertiliser value chains continue to benefit from various government programmes and policies, including continued prioritisation for funding on the auction floor system,” she said.

“The industry is facing challenges and amongst them is the increase in price of imported fertiliser raw materials which have tripled on the global market. This has been exacerbated by the prevailing Russia-Ukraine tension, which are the major global suppliers of fertiliser raw materials. In addition, high cost of borrowing on the local market, for working capital and retooling purposes remains a constraint to the fertiliser value chain players.”